At a press conference after the meeting, the students explained their demands " We have asked for a greater number of teachers to enable a better quality education and a better use of materials and technologies to encourage access to education to the less favored students" explained Anais, a student from A Coruña, adding that they also demanded the government "to allocate part of the aid to raise awareness and to facilitate access for girls to basic and higher studies in Latin America". Anais also said that the meeting has helped her to see that politicians are real people". 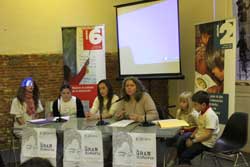 Lucía Rodríguez, representing the GCDE pointed out that " in spite of the crisis, the government should not forget its commitment with girls and women who cannot reach education because of gender. The government is only half way in allocating 8% of the Official Aid for Development to education".
Sofía, another student from Madrid, pointed out that "Delia Blanco has promised to take our demands to the government" and said that this experience has allowed her to meet people like " 71 year old Luisa, from the School for Adults of Vallecas with a very interesting history".

Commitment of the Spanish Government 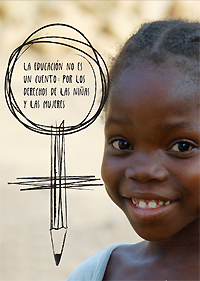 During 2006, the Cooperation Commission approved a proposition demanding the government to make a greater financial effort to promote education in deprived countries. In 2008, Secretary of State for International Cooperation, Soraya Rodríguez, ratified the commitment of allocating 8% of the Official Aid for Development to basic education and last year President José Luis R. Zapatero in the framework of the campaign "1Goal", renewed the support saying that " education is a basic fundamental right linked to the dignity of the person, to the equality between men and women and to the right to citizenship. And it is also one of the most effective tools to eradicate poverty".

Delia Blanco also expressed that it is "extremely painful to touch unequal gender rights in the less favoured countries and the amount of girls that cannot go to school for cultural reasons. We cannot allow that only part of the population may choose its future".

This year the week is focused on "Women and Girls Education", drawing attention to the gender issue, an unfair reality that as of today, keeps 37 million girls out of school and has made 506 adult women illiterate.

From April 11 to 17, almost all Spanish cities have carried out different impact directed activities. This joint action will be part of the Action Week held worldwide during this month.