The Global Campaign for Education travels to South Africa

Entreculturas has travelled to South Africa during the 2010 FIFA World Cup to be present in the campaign 1 Goal for Education. Leticia Silvela and Deyanira Hernández, our correspondents in the African country, report on the 1 Goal, the campaign that Entreculturas is carrying out with Ayuda en Acción and Educación Sin Fronteras, in order to make impact, during the football event, on the fact that universal education is necessary.

Some days ago, the School Bus 1 Goal started its engine. In front of Soccer City Stadium, around 30 students have participated in the event, together with K´naan, the African singer, who, together with David Bisbal has given his voice to the official song of the 2010 World Cup.

Boys and girls have played a small football game and given messages in favour of education together with K´naan, who has said that "those of us, who have had access to education, are not aware of the present we have received. K´naan, born in Somalia and living in the US, has admitted to be very fortunate in having been able to go to school in his country, despite the war. "Education is necessary to fight poverty" said the artist. 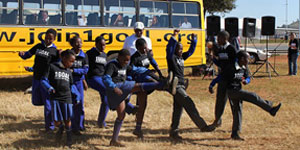 The bus which announces the address of the web 1 Goal, will travel to the different South African cities where the matches are being played, with stickers of the campaign ambassadors.

This Wednesday it will head for Soweto, the birth place of Nelson Mandela, where Shakira will visit a school on the last day of school in Johannesburg. With this and her famous song Waka-Waka, the campaign´s ambassador wants to show, once again, her engagement with education and her contribution to the goal that 72 million children who still have no education, may have this right guaranteed very soon.