NGO and Companies Forum, are we all speaking the same language? 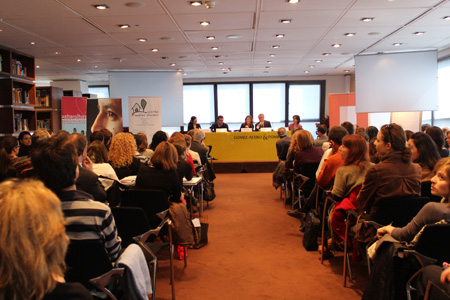 The first part of this Forum had a masterly intervention of Fernando Vidal, Professor of Sociology and researcher of the Universidad Pontificia of Madrid and president of the RAIS Foundation. Under the motto "Companies and NGOs: are we all sharing the same objectives? Are we all speaking the same language? Protecting synergy in Crisis periods." This sociologist answered two questions in that way: "the thing would be that we all are using words from a nonexistent language, a language for discovering (...). This lack of a common language is misinterpreted the context of the 2008 Crisis which is leaving deaf and mute. If we find a new language, we will be able to talk about this Crisis in a future". Then, he surprised to public when he sent two initial messages for both entities: "Do not ask for money. Do not buy or sell legitimation".

During his conference, he explained the fourth syntax rules of the language that NGOs and Companies speak: Tolerance, Information, the Net and Mission.

With regard to the first one, he affirmed "We do not need the kind of Tolerance that only comes from functional division. To be able to exert the competences, NGOs and companies need to combine goods and relationships according to the logic commerce and in community". About Information, he defended the opinion about "the field of the community in general and NGO in particular must take part the knowledge community in the companies; and these companies must take part the knowledge community in the NGOs" (...) "So the most important and difficult for NGOs and companies is not only to be member in a common mission, but in the mission of the mutual development". Therefore, "company must not be a financial backer mainly and NGO do not have to be a validator in priority because the knowledge as partners is where the relationships have the major implication". Both together, the community is able to have several inscrutable and interpretive points of view which are in the whole society and culture".

When he talked about the Net as a new way of connection in our sociology, he completed his first affirmations to calm public down: "Do not give money or sell legitimacy. Do not receive money or legitimacy, only give to yourself". "There's absolutely no doubt about that money and legitimacy take part the possibility of development of each agency (company or NGO)- in both sense- because companies authenticate the NGO when it have been chosen and guaranteed the sponsorship; while NGOs give also money companies in publicity and others profits. Moreover, there cannot be the slightest doubt they can make us forget the essential thing and to prevent the main thing of the new public architecture". Then, "the question is not who is going to finance the NGO or who can transmit them the value or channel the CRS in a company, the true question is: who are going to be my partners? Obviously, the alliance is only possible if the mission is shared. For that, we need the fourth and last syntax rule: the mission".

On this fourth rule, he affirmed that the missions of NGOs and companies are the same. Although we have different competences or purposes, the mission is the only one: the total development of the persons and their communities with the commerce or the creation of a community." Finally, he finished saying that "syntax rules between the NGOs or companies are not bilateral. These rules should be applied in the heart of the pentagon with power: the administrative agencies, cultural and media agencies and the personal dimension of the involved persons (or in the internal manner, but this is very complicated and long matter as well)".

The second part of this meeting was moderated by Ana Sainz, Director of the Seres Foundation and it consisted of an exhibition panel with the experiences of the RSC and Foundation managers. Evelio Acebedo (Portia Solutions), Ignacio Sequiera (Fundación Exit), Rosa Briales (MRW España) y Carmen Pombo (Fundación Fernando Pombo) took part in it. They were talking about how the relationships are established between both institutions; and how the relationships are "before and after; and how the Economic Crisis have been modified these relationships.

Between other things, they asked for a change in the Mecenazgo Law and they gave several ideas as for example: to create new ways of work to bring them closer; to admit the idea that RSC is not only something to do, but it is a strategic and a tool in addition for the company; it is necessary to make more questions to the parties that are involved; and, when they are considered member and the objectives are the same, in general, the work between companies and NGOs works.

From Entreculturas, Chus de la Fuente took part to explain the successful of the collaboration with some companies for the development in the solidary road race the past January.

The president of the Fernando Pombo Foundation brought the day to a close. Joaquín García-Romanillos started saying "Jesus´ Company has followers here because many members have been educated by Jesuit Universities". García-Romanillos defended that we are not only absorbed by an Economic Crisis, but by Moral and Spiritual Crisis. For that, his Foundation proposes "to develop values such as effort, perseverance, light, honesty, solidarity and professional ethics". It is really good that our lawyers receive these values, the foundation benefits the company, and he finished saying that NGOs and companies can share values each other".