Shakira takes her message on education to a school in Soweto

The singer said: "It has been very important for me to know first hand an African school, understand its education system and see the study conditions of the pe they will be able to develop it thanks to the effort and dedication of their teachers.students.By and each girl may go to school in any part of the world.

"This is a great opportunity to draw attention to the fact that nowadays, 72 million children have no access to education. I hope that we may take advantage of this moment and that the World Cup may leave a sustainable legacy for education."

Isu'lihle Senior Primary teaches 1.000 boys and girls in the area of Zola, in Soweto. All the students have made their voices heard in this call for the right to education.

The campaign 1Goal for Education does not aim to raise funds; instead it asks people for their signature in the name of those who cannot sign and to get to know the power of education to change reality. 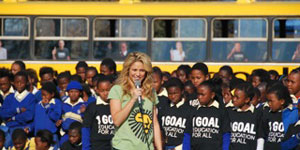 At the beginning of the week, South African President Jacob Zuma, announced an Education Summit for next July 7 in Cape Town, inviting world leaders and urging them to engage so that every boy and girl may attend school by the next World Cup in Brazil.

As of today, the campaign is supported by more than 8 million people in more than 100 countries, with the support of the FIFA and more than 150 football players such as Michael Essien, Ronaldo, Pele, Zinedine Zidane, Rio Ferdinand and the whole Spanish team.